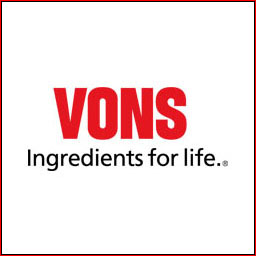 User (04/12/2017 10:49)
I volunteered at this Vons as a bell ringer for the Salvation Army and did some shopping as well. I delt with the manager, cashiers and a few bagger/cart wranglers and they all were very nice and helpful. Happy Holidays!

User (18/09/2017 01:31)
Store was big, but not pleasant due to smell! Possibly using the wrong floor cleaning chemicals. However the smell got much worse in the meat department!

User (17/07/2017 08:08)
Great produce section, meats good as well, a little high on everything else. I can go to some competing markets and get stuff cheeper. If you plan right you can save some good money just depends on what you are buying.

User (03/07/2017 13:20)
Very much customer friendly. Particularly enjoy inside service & help getting groceries to my car. I am a senior handicaped female appreciating the continuing service I receive at Von's. Thank you.

User (28/06/2017 08:17)
Vons has two kinds of apples which I cannot find anywhere else. Jazz apples and envy apples along with red delicious, my favorite apples. They also sell brioche bread and buns, and egg bagels. I can't find any of these items anywhere near me. So for those items and closeness, I love them.

User (14/06/2017 05:10)
Alexis in the Deli Department is Amazing! I called within 24hrs for a tray of chicken next day and she made it happen. The entire team worked well together. I live close to Albertsons in Lemon Grove and getting someone to commit to an Deli Order is like asking for their first born. Very rude and lazy people at Albertsons. The 2 mile difference was well worth it. Vons la Mesa is the best.

User (05/03/2017 11:45)
Taking the 5 stars down to a two. Now, I'm not usually the kinda guy that does this, and it took six months of being treated like crap to do this, but let me just say that first off, everyone in the deli is great. The lady with glasses, her name's Breanne or something with a "B" deserves a hell of a raise, because she, quite frankly, is your best employee. My cashier tonight was great as always (younger bearded guy, African-American, I think) but as for everyone else, you need get your crap together. Short lady with glasses freaking looked at me then walked away as I politely asked if she was opening the checkstands because, as usual, there's fifty people in line and two checkers, one on the express lane. Older curly haired Caucasian lady with glasses had been talking to me like I'm stupid for the last six months, i.e. I go to buy beer in the morning for after work, and the liquor license hasn't "started for the day" and she treats me like a moron, Oh, it's always been this way" like I should know when your liquor license starts. Fine. But I just turned 21 a couple of months ago, and I haven't bought beer here yet, you know? That lady has been rude to me every single time I've been in, which is about once a week. P.S. I have a full time job as a construction project manager, part time in college, and I used to work at Safeway in Sebastopol, CA. Your job is not that hard, okay? Plus, checkers get paid more than me, so quit being an ass. Thanks.

User (22/02/2017 01:44)
Ok. I used to work right next to this Vons and it's walking distance from my apartment. They USED to have self check out service, those were the good old days, when someone with only 6-10 items for taco Tuesday could get in and out without much of a wait. Now, the self check out is gone and instead they have two express lanes. Let's do the math on that. 4-2=2 and if we account for the fact that only ONE of those lanes (if either) is open at a time, we'll take that down to one. ONE lane to replace 4 self service 15 items or less lanes.
When I inquired why they got rid of them and asked if theft was an issue, they said no. Theft wasn't an issue, it was because one attendant ended up ringing up four people at a time and that it was nearly impossible. I have some issues with that as HALF the time that "attendant" wouldn't be available as they were gabbing with some other associate or complaining openly about the manager/company to someone 3 lanes down.
Some of the front end people are great and very nice, sometimes too great as they will continue to have conversations with the people checking out after they've finished with LITERALLY a line down the aisles.
The problem: This Vons has a huge selection but I don't want to come here because the "3's a crowd" thing they came out with, NEVER helps. Whoever does... I don't know, the scheduling or the hiring needs to be fixed.
My solution: I drive to Ralph's on Montezuma. I've never had the crazy issue with lines there as I have at this Vons.

User (17/02/2017 20:01)
This place is hit or miss. There is always a motley crew of shoppers. Most of the workers are friendly and helpful but a few are just plain rude. Oh, and the Starbucks inside is the worst I've been too.

User (03/02/2017 21:58)
Been shopping at this location for over 20 years even after we moved to LG...the "other" grocery store is down the street...but this Vons is always clean, customer service is excellent but, it's "Ranchers Reserve" that keeps me loyal. Thank you Vons

User (16/12/2016 16:52)
Although this location has a larger selection than others in the area, I gave this a low rating because there's always something going on that makes it take forever to check out. Whether it's a customer who wants to have a deep conversation with a manager in the checkout line, or a customer who wants to buy 30 items in the express 15 item lane, I find that I'm always annoyed by something. Other Von's locations seem to have a better clientele.